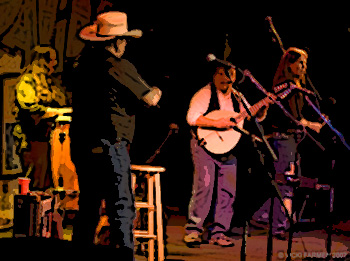 Clandestine is hard-driving, toe-tapping Texas Celtic sound. Formed in 1991, the band is known for their brand of blasting tune sets and fresh songs. Piper EJ Jones and fiddler Gregory McQueen lead the tunes with the full force of their individual musical energies. Al Cofrin brings cittern and occasionally another set of bagpipes to the mix. Percussionist and singer Emily Dugas captivates with her original song collaborations with Al, as well as her singular interpretations of songs in the Celtic genre. EJ and Al also join Emily on vocals, with many songs now set in three-part harmony.

Clandestine is a regular feature at the Texas Scottish Festival and the North Texas Irish Festival, as well as their home pub, McGonigel’s Mucky Duck in Houston. The band has toured the US extensively and had successful stints in Canada and France. Now, Clandestine is poised to tour widely again.